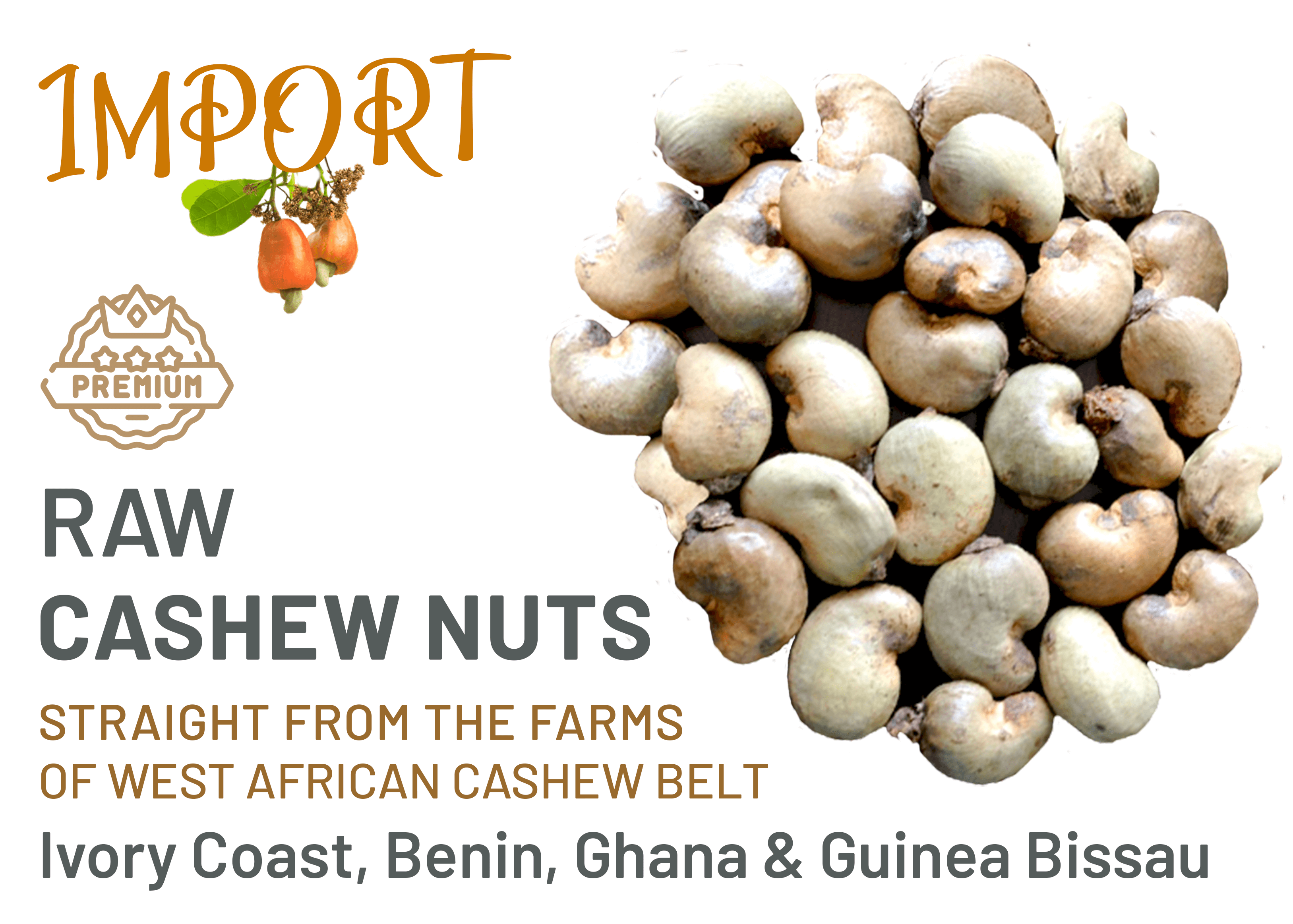 Raw Cashew nuts(RCN) are grown commercially in Africa, Latin America, and Southeast Asia. The largest cashew-producing countries and exporters in the world are India, Vietnam, Brazil, and Indonesia.

Of late, Africa is being seen as a major cultivator and producer of raw cashew nut.

There is a huge demand for cashew kernels globally. However, it is monopolized by a certain segment of traders. The cashews from West Africa are generally exported as unprocessed raw cashew nuts. On average, 90% of the cashew raw nuts from Africa are exported to India.

Mudra Global being a prime trader in agro commodities, acts as the main supplier of raw cashew to cashew traders and processors in India.

Mudra Global is the Preferred Raw Cashew Nuts importer for traders from all across India. We are trusted by them as we ensure that:

• We meet the quality standards in terms of out-turn or yield, nut count, humidity content while exporting, and packaging and shipment.

• We are directly connected with crop growers and hence provide raw cashew nuts as RCN importers directly from farms.

• We offer competitive prices to the buyers.

We source the best raw cashew nuts (RCN) that are grown in suitable soil: sandy to laterite and in humid tropical conditions.

Our cashew nuts are from the world’s leading cashew exporting belt consisting of Ghana, Guinea, and Ivory Coast.

We offer the best deals in Raw Cashew Nuts (RCN) originating from:

A. Ivory Coast, Benin, and Ghana

Origin of the raw Cashew Nut:

The raw cashew nut tree is an evergreen tree of the sumac family and is cultivated for its nuts, known as cashew nuts. The scientific name of cashew nuts is Anacardium occidentale. The cashew is a characteristically soft nut with a distinctive sweet flavor.

The cashew nut tree originated in northeastern Brazil. It came to India, when the Portuguese missionaries, during the 16th century, brought it to India and planted them at low altitudes near the sea.

Cashews, or Kaju, as it is called in Hindi is a nutritious and important dry fruit grown in eight states in India, namely Andhra Pradesh, Goa, Kerala, Karnataka, Orissa, Maharashtra, Gujarat, and Tamil Nadu. In India, the largest number of cashew processing units are located in Kerala. Almost 0.24 kilograms of cashew nuts per capita are consumed within India.

In India, cashew is grown in an area of 1.02 million hectares, with a productivity of 706 kg/ha as of 2018. The major cashew-growing Indian states are Maharashtra, Andhra Pradesh, Orissa, Kerala, and Karnataka.

The approximate raw cashew nut requirement of the country is estimated to be at 4-5 million metric tons or more by 2050. In order to keep up with the rise in the domestic and export demand for cashew (the country is the largest cashew consumer worldwide, and the second-largest exporter of cashew kernels), Indian companies have recently invested in the purchase of large plantations and financing and management of processing facilities in Africa. India is one of the largest cashew consuming markets which is steadily growing year on year.
(Source: www.mordorintelligence.com)

The cashew tree has multiple benefits and almost all parts of it can be used. The cashew tree wood is used in many items like shipping boxes. The resin that is inside the shell of the fruit finds many applications in alternate medicine and is found in many insecticides as well.

Cashews are rich in oil and uniquely flavored. Cashews are a common ingredient in many South and Southeast Asian cuisine and. However, in the West, they are mostly consumed as premium-quality protein-rich snack food.

Cashew nuts are known for their multiple nutrients and health. Cashew nuts have to be processed before it can be consumed.

Cashews are known to be good for health too. Cashew nuts aid in heart health by reducing bad cholesterol and increasing good cholesterol. It also helps in lowering blood sugar.

Cashew nuts are very high in nutrition as well. Though the cashew is small, its nutritional value is quite huge. On average, a 40gm serving of cashews contains 98% of copper, 34% phosphorous, 29% manganese, and 28% manganese of daily dietary needs.